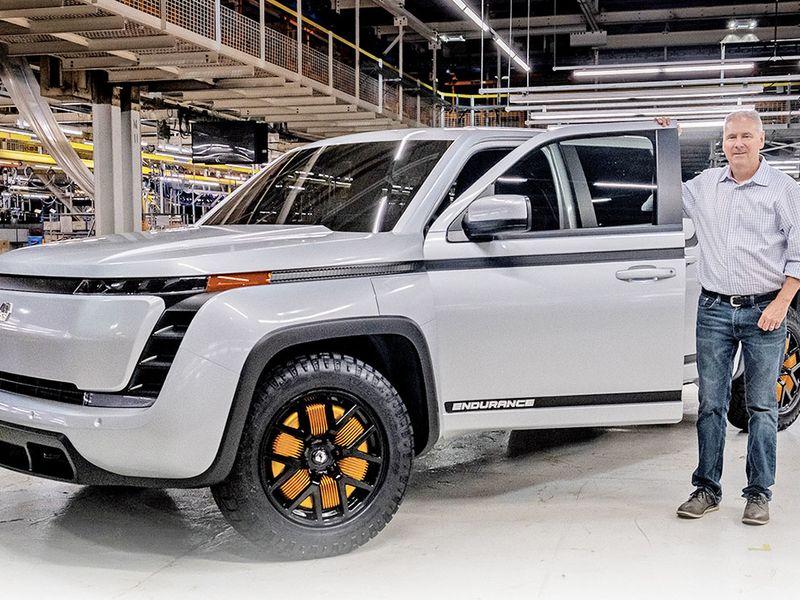 Lordstown Motors is closely following Tesla’s early playbook as it gears up to launch late next year the battery-powered Endurance, a full-size pickup with four electric motors, a 250-mile range and a starting price of about $52,000, before a federal tax credit of up to $7,500.

Flush with $675 million in cash from a reverse merger with a special-purpose acquisition company, Lordstown’s path will veer in a different direction than Tesla’s did once the Endurance starts rolling down the production line.

CEO Steve Burns told Automotive News during a brief test drive of the company’s lone operational prototype in suburban Detroit that Lordstown will not sell to individual consumers — at least initially — and will target only fleet customers.

With just 50 engineers on staff, one drivable truck in existence, 40,000 preorders and deliveries scheduled to start in about a year, Lordstown will not only need every single thing to go perfectly, it might also need some luck. There’s no telling, for instance, how the COVID-19 pandemic could affect product development.

Burns’ plan to ramp up production quickly with a vehicle that targets the Ford F-150 in safety, handling and quality revolves around making the Endurance extremely simple. Engineers did that by reducing the number of moving parts in the drivetrain and by buying proven components already used in other vehicles.

“There are only four moving parts on the entire vehicle,” Burns said of the four-wheel-drive Endurance’s powertrain. He’s referring to the electric motors installed in each wheel. They eliminate the traditional transmission, transfer case, axles, U-joints, driveshaft and other driveline parts in today’s 4wd trucks.

The motors were designed by Elaphe Propulsion Technologies, a Slovenian company. Elaphe has been working to improve the performance of wheel hub motors and to reduce their weight. The motors are mounted behind each wheel on the Endurance.

Burns said Lordstown licensed Elaphe’s technology and will build the wheel hub motors at its plant in Ohio, which until 2019 assembled the Chevrolet Cruze compact sedan. General Motors lent Lordstown Motors $40 million, some of which was used to buy the plant.

GM parts are all over the Endurance. “We’ve worked a deal with GM, and they are selling us the little things that trip up everybody,” said Burns, while sitting in the Endurance test truck. “These seats we are sitting in are from the Silverado. So are the door mechanisms, seats, and airbags — all Silverado,” he said.

Simplicity isn’t the only reason the Endurance is made of parts bin components. Cost was also a driving factor, Burns said.

“Every EV company comes out at a luxury price point and then says with volume we’ll move down to the mainstream.

“A fleet [operator] won’t pay a luxury price. We had to figure out a way to come to market at the same price as a Ford F-150 right out of the gate,” he said.

The Endurance will use lithium ion batteries from two Korean suppliers. Burns said Samsung is one of the suppliers, but he would not name the other.
The company’s proprietary technology is in the software that controls the four wheel hub motors, about 1.5 million lines of code, says Chief Engineer Darren Post, a GM veteran who was the vehicle line executive for a number of vehicles, including the Chevrolet Impala, Saturn Sky, Pontiac Solstice and Opel Zafira. Post, who was in charge of manufacturing for Hummer, also worked at Karma Automotive after he left GM.

Post said Lordstown Motors’ path to production looks like this: Three more trucks, which he called “alpha builds,” are in the process of being assembled and should be operational by the end of the year. But 2021 leaves little room for error and disruption. Plans call for 40 “beta builds” hitting the road next year for durability and safety testing. The goal, Post said, is to have at least 500,000 test miles before production of salable vehicles begins about a year from now.

There is no time frame for the consumer version of the Endurance. But Burns signaled that it won’t be anytime soon.

“There will be a consumer version, but first we want make sure we have a national footprint of service. We don’t need a sales network because we will distribute direct to fleets, but we want to have service network. We really want to get a few billion miles before we roll these out to consumers,” he said.

Lordstown officials would not discuss specific production schedules, nor would they say how long it will take to fill outstanding orders.
Asked why a fleet operator would take a chance on a new-from-the-wheels-up vehicle that uses a drivetrain that has never been mass-produced in automobiles before, Burns gives a one-word answer: Money. With no gasoline or diesel fuel to buy and the only scheduled maintenance items for the first five years being windshield wipers and tires, fleet operators can — in theory — reduce costs by using electric trucks instead of gasoline- or diesel-powered pickups.

“Fleet [managers] buy on total cost of ownership. That’s the main thing. We will save them $20,000 over five years over the cost of running a Ford F-150. We start out at the same price, but you start saving money on day one,” he said. “So far everyone has come out with expensive trucks, Rivian and Hummer. No one is in this lane of coming out of the gate with a fleet truck.”