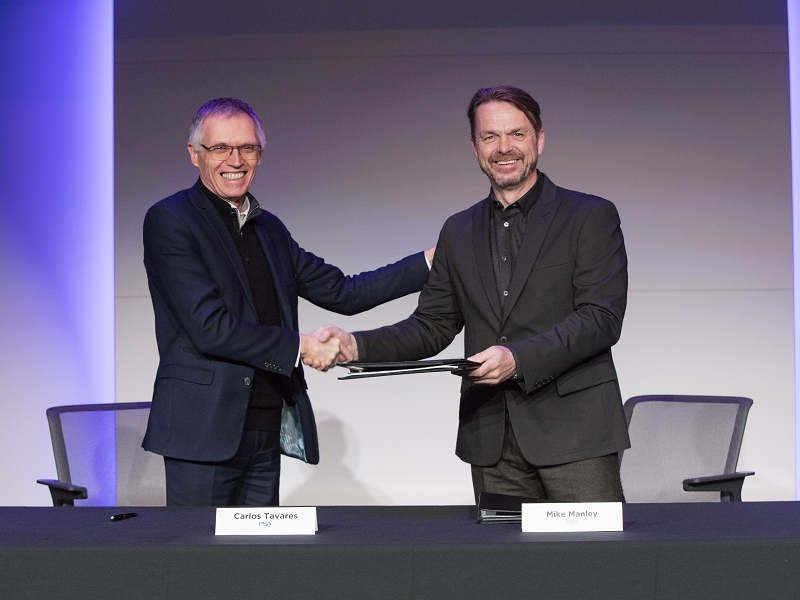 PARIS — The outlines of the power structure at Stellantis, the new company formed from the merger of Fiat Chrysler and PSA Group, are starting to take shape ahead of the expected start of trading on Jan. 18, but key positions remain to be filled.

Incoming CEO Carlos Tavares will be in command of operations, with the added distinction of serving on the board of directors as one of only two executive members. The other will be Exor chief John Elkann, who will be board chairman, a role he now holds at FCA.

Currently, PSA’s supervisory board has no executive members, while FCA’s has three — Elkann, CEO Mike Manley and CFO Richard Palmer. Manley’s role in Stellantis is now clear: He will lead the Americas region, which includes the highly profitable North America business, Latin America and South America.

Manley’s appointment could eliminate potential friction between Europe and Detroit, as he and Tavares have been in constant contact during the merger process and reportedly have a close relationship. In a previous Chrysler alliance involving a “merger of equals” — DaimlerChrysler — cultural and business clashes between the US arm and Germany were blamed in part for its failure.

Tavares’ stint as head of North America at Nissan should also help ensure that the region’s interests are taken into account at Stellantis’ European headquarters.

His counterpart in Europe has yet to be named, but potential candidates include Maxime Picat, head of Europe at PSA; Pietro Gorlier,  COO for Europe, Middle East and Africa for FCA; and Michael Lohscheller, the head of Opel/Vauxhall and a member, with Picat, of PSA’s powerful four-person management board.

Palmer has been flagged as the favorite to become CFO of Stellantis because of his experience with the Fiat-Chrysler merger and his long tenure at FCA. PSA’s CFO, Philippe de Rovira, has been in the job only since 2019.

Other important positions not yet announced at Stellantis include head of operations for China, a major market where both groups are currently struggling; and head of other global markets such as India, where both Jeep and Citroen are planning major expansions. Behind the scenes, leaders are likely to be named for cross-company functions such as purchasing, sales and marketing, R&D, and digital operations that will help generate the promised 5 billion euros in annual synergies from the merger.

The Stellantis board of directors will represent a fresh start, with few members from each automaker’s current board.

As agreed in the companies’ combination agreement signed in December 2019, each automaker has nominated five members in addition to Tavares; of the 11, seven are considered independent.

One board member nominated by each company will represent employees.

The senior independent director will be Henri de Castries, former CEO of the insurer AXA and a board member at a number of companies including Nestle.

The other six independent board members are:

Tencent teams up with Chinese automaker Geely on driverless and smart car tech
Unifor ratifies GM deal that includes $787M retool for electric van production
Ford’s Matt VanDyke to become CEO of FordDirect
Millionaire’s Sci-Fi Garage With $30 Million Supercar Collection Is Out Of This World
For his 90th birthday, a 4th Corvette