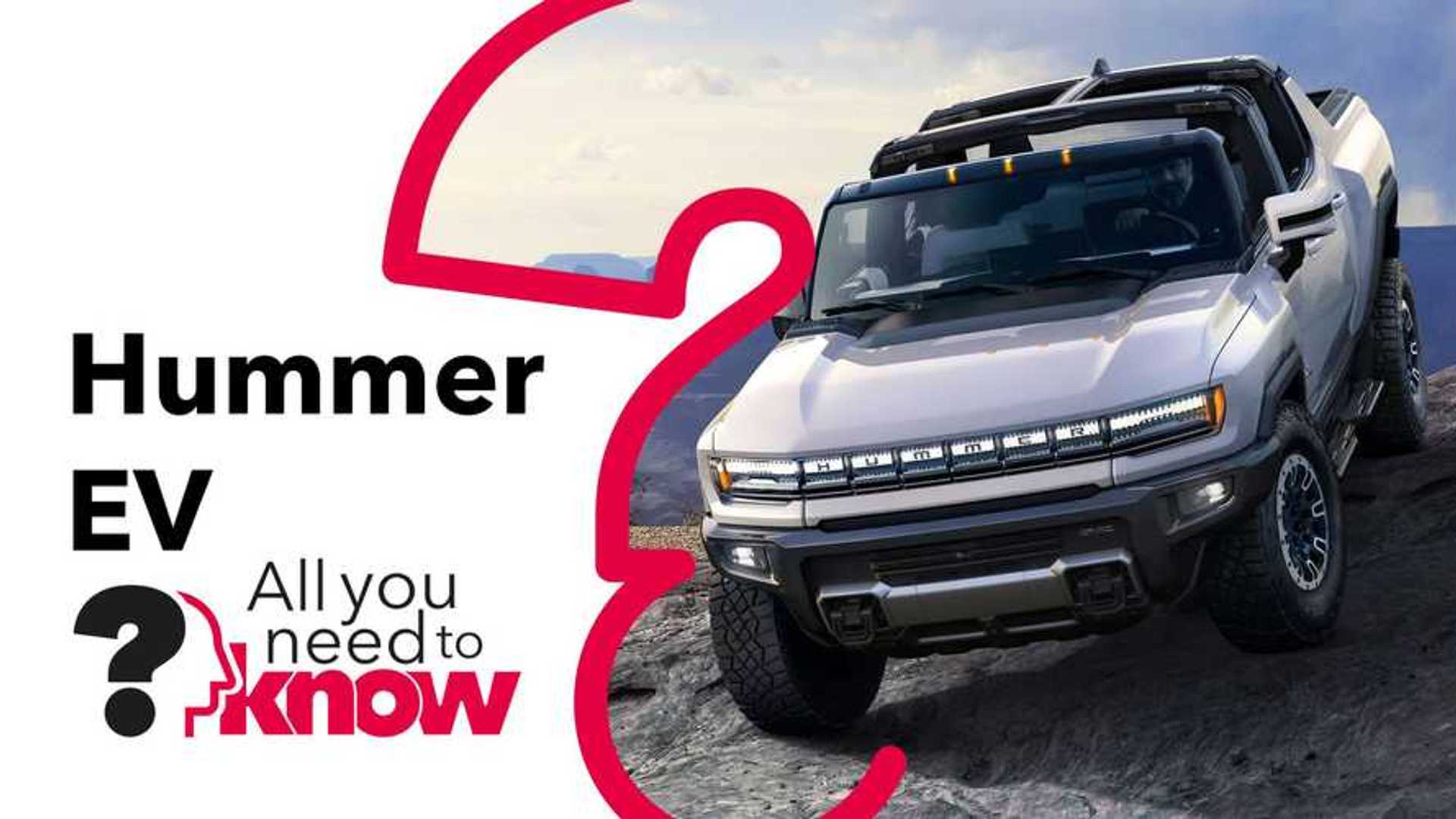 10 years after the brand was put to rest – Hummer is back as an EV.

The newly unveiled Hummer EV has 1000 horsepower, around 1000 lb-ft of torque and 0-62mph or 0-100kmh in less than three seconds. Numbers that would make any other pickup weep at the tailpipe.

Let’s take a look. And remember if you like this video, please give us a thumbs-up, and subscribe to the channel, hit that notification bell so you never miss a show.

GM has been pretty faithful to the original design of the Humvee, the vehicle designed to do anything, go anywhere, get American troops out of trouble. In fact, they used to dump these Humveesn out of military helicopters. So they were built pretty tough back in the day. The version they unveiled was running on 35 in tires but it can accommodate 37-inch tires like the original Hummer.

Truck fans will be pleased to hear there’s a back window that drops down to get some fresh air in the cabin. And if you want to go Alfresco. The whole roof comes off in four separate sections, and it stows away inside the huge frunk. They call it Infinity Roof. There’s a five-foot bed, the tailgate can fit speakers if you want to have a party.

The battery on the Hummer EV is good for 350 miles of range and there are over 200-kilowatt hours of stored energy. This is a double-decker battery. Each module in the Hummer has 24 pouch cells stacked, standing upright. And every 12 modules make up each of the two layers. A total of 576 battery cells. The 800-volt battery system charges at 350kW, making it future proof for the next generation of chargers. And yet it has a clever system of splitting the battery in half to charge at all the existing 400-volt chargers.

Underneath they’ve installed body armor to protect it against rocks. There’s fully adjustable air suspension that will raise and lower the Hummer by 8 inches from the lowest to highest settings. Most of the time at about 10.1 inches of ground clearance. But you can change the mode, specifically, they call it Extract Mode. In other words, you’ve got yourself in trouble and you need to extract yourself well then the suspension will lift the vehicle to 16 inches of ground clearance. And when you’re cruising on the highway. We’ll go from that standard 10 inches down by two inches to help with the efficiency.

18 cameras for autonomous driving assistance, but also to help you when you’re off-roading. Including two cameras facing down, at the axle clearance. Very useful when off-roading. But won’t these cameras get dirty GMC says they thought of that and they’ll have little spray washers that will clean the cameras off when they get dirty. As for driving technology. Let us introduce you to Crab Mode. It’s not just the front wheels that steer. Okay, rear-wheel steering isn’t a new thing. But having them move in the same angle as the front wheels. Well, that’s pretty rare. So up to 10 degrees, the rear wheels can turn in the same direction as the front wheels, and they call it, crab mode, so you move the whole vehicle diagonally.

Inside the Hummer. It is more modern but still resembles the original hummer. You do get air conditioning for the back seats along with rear USB C sockets. There’s plenty of storage in fact the seatbacks of the rear seats, actually, open up like little doors.

Driver information display is 12.3 inches in the middle is a 13.4-inch infotainment display. That middle screen that will also be able to display things you might want to when taking the vehicle off-road GPS coordinates tire pressure, all around the angle the pitch the role of the truck in a pretty cool software, animation, so you can see exactly what your truck is doing all of the exterior cameras visible on this center monitor, as well. Supercruise is achieved with that black bar going over the top third of the steering wheel that incorporates some sensors, a camera looking back at the driver for some awareness eye tracking stuff, supercruise will allow you to self drive that version of autopilot on 200,000, miles of roads in the United States to do lane change and take a bit of the driving the onerous driving nature, away from the driver.

Underneath the skin, we’ll find three electric motors. Firstly, there’s one motor driving the front two wheels and that’s because under maximum acceleration the weight balance moves rearward to the front axle is traction limited. On the rear axle there are two motors and they do drive a rear wheel, each, so that means you can do some funky software things with torque vectoring. In other words, start and stop the rear wheels as and when you need to for maximum traction. Each of the motors will output 250 kilowatts of power. Let’s talk performance, how do you go naught to 60? The GMC Hummer has Watts To Freedom mode or WTF. Which is their version of a launch mode. Software trickery stiffens the dampers for the three-second sprint to 60mph.  GM didn’t reveal the weight of the Hummer at the launch, but it’s sure to be the heaviest truck ever to achieve these supercar speeds.

This version that we’re talking about today will come off the line in 2022 and cost over $112,000, but there will be cheaper versions.