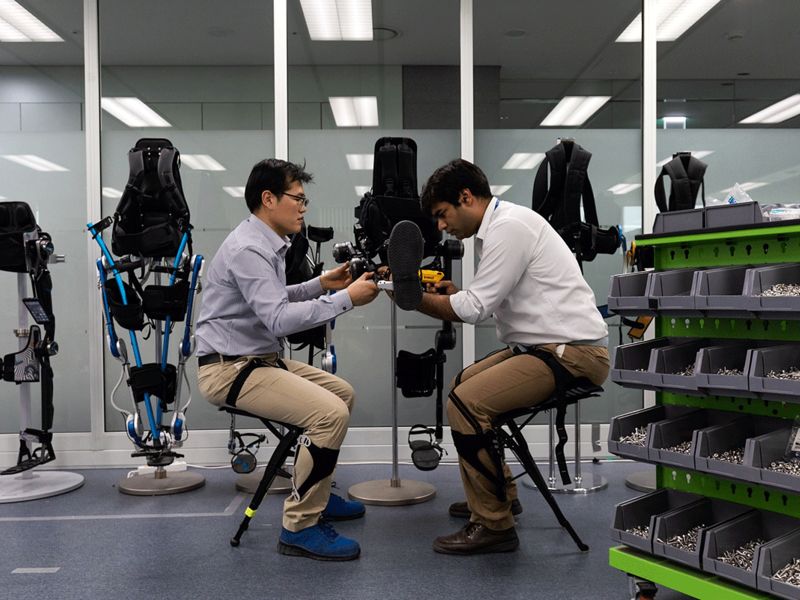 Wearable technology is taking on a different meaning in the world of automobiles.

As employees age and younger people shun the idea of working on a factory production line, car companies are looking at ways to lighten the load.

High-tech exoskeletons are being explored by automakers such as Hyundai Motor Co., Ford Motor Co. and General Motors. The technology, initially developed to aid people who lost the ability to walk or stand on their own, eases fatigue and helps prevent injury. It’s particularly useful for repetitive processes that can’t be automated even as robotics makes big inroads into the sector.

All sorts of companies have an “emphasis on corporate social responsibility and labor protection” and are making an effort to avoid workplace-related injuries, said Xu Zhenhua, the founder of ULS Robotics, a Shanghai-based firm that provides exoskeletons for carmakers, airport operators and other industrial manufacturers.

ULS Robotics is developing three exoskeletons that workers can wear to hold and lift heavy equipment. One is for the upper body, another goes around the waist and the third focuses on the lower limbs. The first two weigh about seven kilograms each and allow a wearer to lift an additional 44 pounds. They’re powered by a lithium battery that has a life of about 6-8 hours.

Xu said the exoskeletons are most useful along general assembly lines, which still rely to a degree on manual labor. Just as scooters and shared bicycles have helped solve the “last mile” problem for e-commerce deliveries and commuters, so too can exoskeletons help solve “the last person” problem on a production line, he said.

Future Capital Discovery Fund is an early investor in ULS Robotics. Founding partner Huang Mingming said the exoskeletons solve a problem not only China but the whole world is facing.

“In the past 30 years, China gained an advantage because we had many young people and a low-cost labor force,” Huang said. “However, aging and a declining birthrate started from the early 2010s. While the auto industry is already highly automated, experienced workers are still needed for the final general assembly. That’s not replaceable.”

South Korea’s Hyundai has an exoskeleton to help employees perform overhead tasks and another that turns into chair so workers can complete tasks without bending.

“The population is getting older and people working in factories are also older, which means costs related to industrial accidents are on the rise,” said Hyun Dong-jin, the head of Hyundai’s Robotics Lab. “Wearable devices have become important in lowering these costs.”

Hyundai will trial the exoskeletons made by its Hyundai Rotem Co. unit in Korea and plans to ship them to one of its factories in Alabama later this year ahead of a global rollout. Eventually, it hopes to sell them to other automakers.

Hyundai isn’t the first carmaker to use exoskeletons — in 2018, Ford said employees in 15 plants who perform repetitive overhead tasks would have assistance from a new upper body exoskeletal technology — but it is one of only a few developing them in-house. Ford partnered with Richmond, Calif.-based Ekso Bionics.

Hyun said sensors for wearables also could help in Hyundai’s development of autonomous vehicles. The company announced in December it will spend 20 trillion won ($17 billion) over the next six years on new technology to help make the switch to electric and self-driving cars.

“In an automated procedure, it’s easier to detect work inefficiencies and make adjustments,” he said. “It’s harder to know a worker’s status. Wearable equipment can help.”