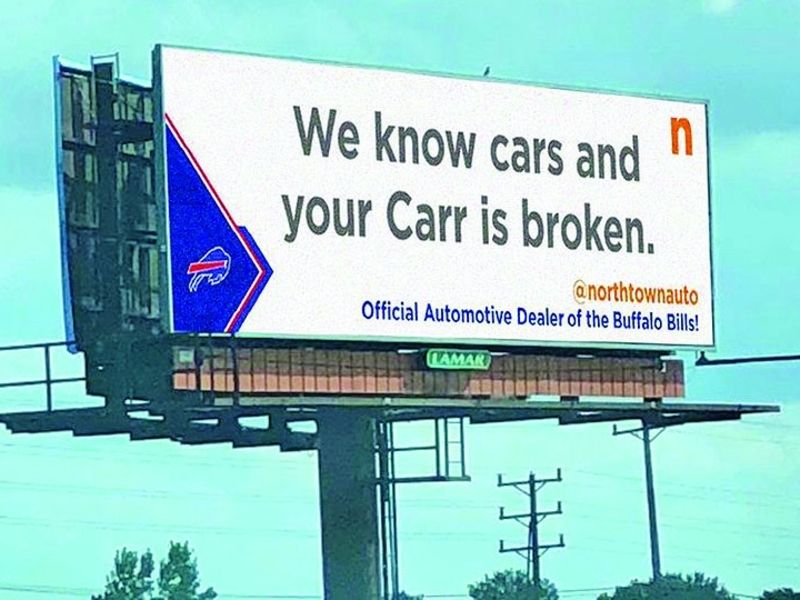 Northtown Automotive Cos. is the “official automotive dealer of the Buffalo Bills.” But with the Bills having their best season in 25 years, Northtown also has become known as the team’s unofficial trash talker.

The group, which sells new vehicles from Fiat Chrysler Automobiles, Honda, Toyota and about a dozen other brands, uses a electronic billboard along Interstate 290 to poke fun at the Bills’ opponents.

“We know cars and your Carr is broken,” the sign read before the Bills beat the Las Vegas Raiders and quarterback Derek Carr, 30-23. “Unplug the chargers,” it said last month, ahead of a 27-17 victory over Los Angeles. “Losing is the Pitts, Ben” went up this month, a few days before the Bills handed Steelers quarterback Ben Roethlisberger a 26-15 loss.

The NFL Network featured one of Northtown’s taunts, with commentator Rich Eisen calling it “next-level trolling.” The message, posted before the Bills beat the New England Patriots, 24-21, read, “Brady can’t save you!” It was a reference to former Patriots quarterback Tom Brady, who now plays for Tampa Bay, and displayed in the bizarre font that Brady’s replacement, Cam Newton, uses for his Instagram posts.

“We’ve gotten tons of reactions. We’ve made it onto ‘Good Morning Football,’ Barstool Sports — it depends on what the content is,” Danielle Schreiber Ellis, Northtown’s customer experience manager, told TV station WIVB. “Basically, it’s family members getting together and creating the content. It’s our little baby. We get together and say, ‘How can we make our community rumble a little bit?’ ”