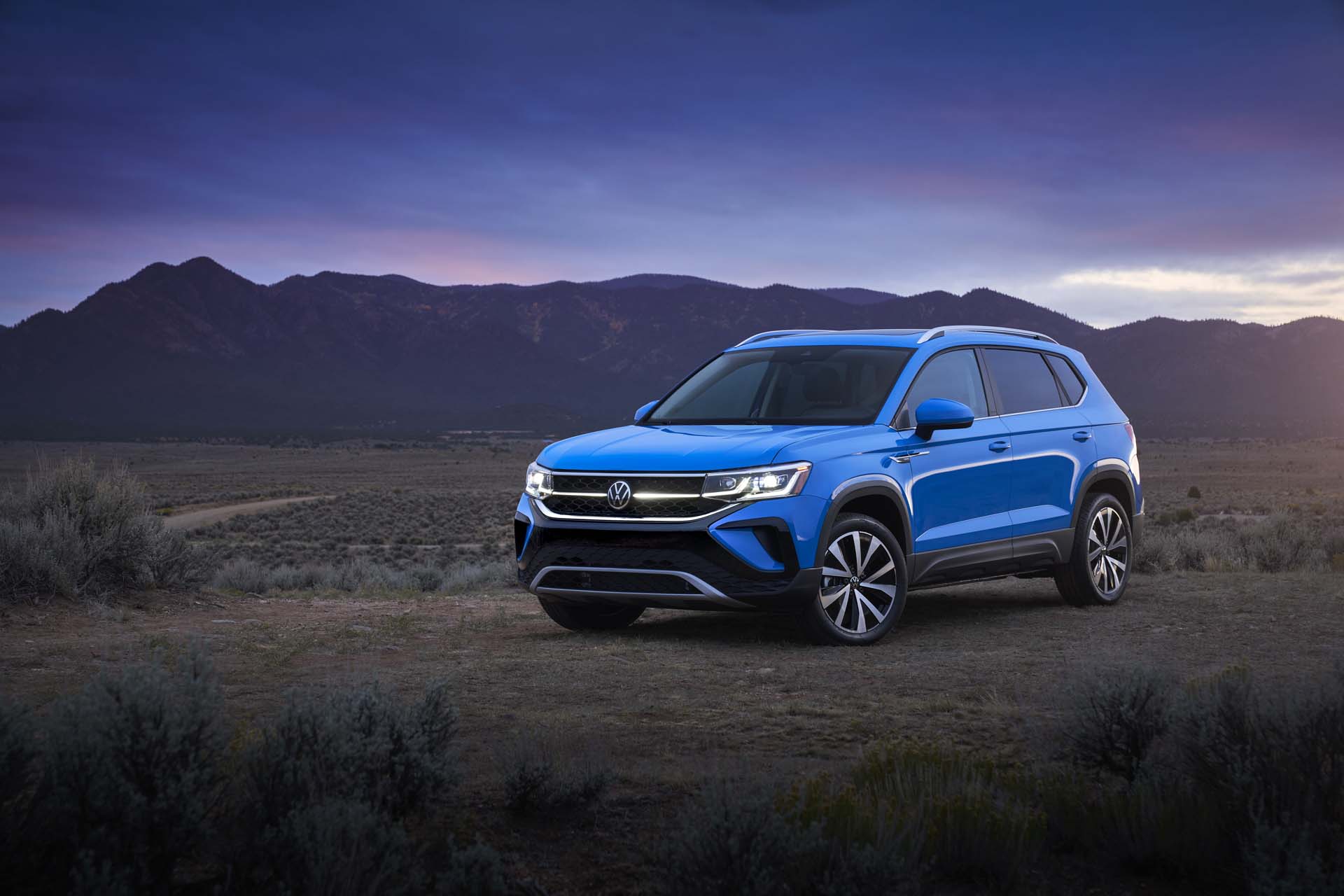 What kind of vehicle is the 2022 Volkswagen Taos? What does it compare to?

The 2022 Volkswagen Taos is the smallest crossover SUV in the Volkswagen lineup, slotting beneath the Volkswagen Tiguan. It’s similar in size to the first-generation Tiguan, seats five, and wears Volkswagen’s characteristic conservative style. In size and segment it fills a space that didn’t exist a few years ago, squeezing between subcompact crossovers and compact crossovers. Other automakers have done the same with the Chevrolet Trailblazer, Jeep Compass, Hyundai Kona, and Mazda CX-30, among others.

Our initial driving impressions of a prototype Taos were promising. It provided more punch than the Jetta and handles with the kind of agility of the Mazda CX-30. The biggest competitive advantage might be on the inside but the prototype’s controls, gauges, and dash were covered in camouflage. We’ll report back early next year when we get more seat time in the Taos.

What’s new for the 2022 Volkswagen Taos?

Everything. Volkswagen’s commitment to expanding its crossover SUVs to keep up with every other automaker started with the Atlas Cross Sport mid-size crossover, and extends now to two small crossovers in the 2022 Taos and the all-electric 2021 ID.4. A subcompact crossover is expected from VW as well.

With its short overhangs, sculpted hood, and square wheel arches housing standard 17-inch wheels, the Taos looks like a baby Atlas Cross Sport. It even wears similar LED headlights bridged by a three-bar grille. The lower bumper is nearly identical to the Cross Sport’s, but what sets the Taos apart is an illuminated bar running through the center of the grille. Unlike the ID.4, the badge in the center of the grille does not light up, but the illuminated, unified face casts a distinct presence at night.

The inside will look remarkably familiar to anyone who has been inside other Volkswagen SUVs. It’s dark, but two-tone cloth seats come standard for a bit of visual flair. Clean, understated lines present a spartan design centered on a base 6.5-inch or available 8.0-inch touchscreen molded into the dash. Three climate dials and a mechanical gear shifter keeps the console simple.

The gear shifter links to an 8-speed automatic transmission that sends the power from  a 158-horsepower 1.5-liter turbo-4 to the front wheels. Opt up to all-wheel drive and get a 7-speed dual-clutch automatic that promises more responsive acceleration. Derived from and eventually replacing the 147-hp 1.4-liter turbo-4 in the Jetta and the Golf, the 1.5-liter makes the same peak torque of 184 pound-feet, but it comes on quicker for a more responsive driving experience.

In our brief drive, the Taos pounced off the line quicker than the Jetta, but for passing maneuvers at speed it seemed to favor efficiency by resisting downshifts, resulting in lag that could be overcome by notching the transmission into S mode.

Volkswagen says the new engine is not only more potent, it is also more efficient, though the automaker didn’t release fuel economy estimates.

What we do know is the Taos runs large for the small crossover segment. It’s 9.3 inches shorter than the Tiguan, but has nearly the same passenger space as the two-row Tiguan sold elsewhere in the world. The 37.9-inches of leg room for rear seat riders is the same or better than larger compact crossovers such as the Nissan Rogue and Toyota RAV4, and the 28.1 cubic feet of cargo volume behind the rear seat is nearly 3 cubic feet more than the Chevy Trailblazer, which is larger than the competition except for the Jeep Compass and its 27 cubic feet.

The Taos also comes with decent standard tech, including its configurable instrument cluster known as the Digital Cockpit. A 6.5-inch touchscreen is standard as is a wi-fi hotspot with a subscription. The good stuff, such as smartphone compatibility, keyless entry, an 8-way power-adjustable driver seat, dual-zone climate control, and heated and ventilated seats, is all offered on mid and top trims.

Likewise, Volkswagen doesn’t include active driver-assist features as standard equipment on the Taos, unlike many of the competitors. Available across the three trims, the suite of safety features called IQ.Drive includes automatic emergency braking, blind-spot monitors, active lane control, and adaptive cruise control with stop and go capability.

How much does the 2022 Volkswagen Taos cost?

Available in S, SE, and SEL trims, the Taos is expected to start around $24,000, including destination. Exact pricing and trim features won’t be announced until closer to the launch date in 2021.

Where is the 2022 Volkswagen Taos made?

The Taos is built alongside the Jetta and Tiguan in Puebla, Mexico.